How Much Does a Baseball Weigh?

The ball is a key component in many sports. Millions are used per year by Major League Baseball, not including those that are used in smaller leagues, as gifts, fan memorabilia, and more. Behind each ball is a unique manufacturing process, with the most important parts completed by hand.

For anyone who has ever held a baseball, the question of ‘how much does a baseball weigh?’ has surely crossed their mind, however, the baseball we know and recognize today hasn’t always been this way. It has taken plenty of variations over the years to get to this final design in baseball size, weight, and color. 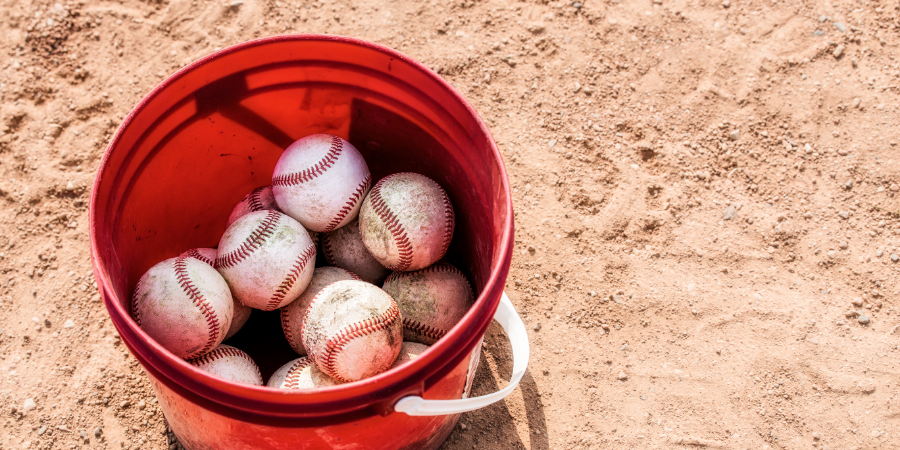 The History of the Baseball

Throughout history, baseball has changed and evolved, in line with the changes made in the sport. Science has played a part in the design of the baseball, and influenced certain factors and details, even down to the stitching of the ball. To appreciate the evolution of baseball throughout the years, it’s important to know how the early balls were different, going back to the nineteenth century.

In the Dead Ball era, baseballs were manufactured inconsistently, meaning that any design, material, and weight (often created by pitchers) were accepted for play. It was in 1876, when the National League was first established, that balls with cores of rubber were designed, by A.G Spalding, a pitcher. The ball was approved to be used in the official league and would stay this way for a century.

In 1910, during the Fall Classic, a new ball with a cork core instead of rubber was introduced.

It wasn’t until 1920 that game rules changed, before that the same ball would be in play for an entire game, only being replaced once it had unraveled. This greatly impacted the performance of the game, with players struggling to see the ball as it became dirty.

1920 was an important year in baseball. The Live Ball era marked the year that spitballing was outlawed, so an effort was made to replace balls throughout the game if they became dirty, scuffed, or soft.

It was also this year that Mr. Spalding introduced the use of Australian wool to make the yarn. Changing the yarn, which around the baseball center, threw the balance of the game, enabling batters to increase hits and home runs.

1934 also marked another year in which big changes were made; the American and National Leagues standardized the ball manufacturing process. The weight of a baseball was decided at 3 1/8 ounces, whilst the circumference of a baseball was set at 7 3/4 inches.

The core of the ball had a cushion, surrounded by black and red rubber. The yarn was then added, in addition to 71 yards of blue-gray wool. The exterior of the ball was covered with tanned horsehide, weighing 1/3 of an ounce, and was 5/100 of an inch in thickness.

The world war caused a shortage of rubber throughout the US, and as a result, baseballs also suffered. Unfortunately, the vast majority of rubber was required for ammunition and for arms to aid the war, so it was decreed that it rubber wouldn’t be available for unessential items.

To work around the shortage of rubber, baseballs manufactured during WW2 used granulated cork instead, with two shells wrapped around the center, made of a substance called ‘balata’.

Throughout this period, the baseball kept changing, and in 1944, when the states were able to mass-produce synthetic rubber, the balls went back to their original pre-war specifications.

After the turbulence of World War II, there haven’t been as many changes. Official MLB baseballs are now made of cork mixed with rubber, wrapped in black rubber. A further outer shell of red rubber is applied, which is then covered by yarn.

In the 2019 season, home runs were an extremely common occurrence after the all star break. There were 37 consecutive days where at least 1 player hit a home run. Many say the baseball ball was altered. Could it have been the weight of a baseball that changed? Pitchers complained about it, I’m sure if we were pitchers in the majors, we would have too!

There are three main types of balls that are used today. Whilst many are familiar with the ordinary hardball, there are differences in size and structure that make rubber and soft compression balls useful for some players, especially in youth games.

Look at this video to learn more:

The modern, hard baseball includes a layer of cement that holds the cowhide to the yarn, which covers the center of the ball. The MLB baseball is made by only one company, and the baseball circumference, as well as size and weight, are expected to be consistent throughout production. You do not want to be hit with one of these baseball balls!

Rubber baseballs originated from Japan, in the 1950s. The ball was first introduced for children to use, with hard baseballs being too heavy, and tennis balls being too light, the rubber ball offered a safe medium. Although not very popular in the USA, they are the main component of many national sporting events that take place in Japan.

Soft compression baseballs are 93% softer than traditional hard baseballs, making them a great alternative for young players who are new to the sport, or for those who wish to play recreationally. The soft baseball tends to have a synthetic leather covering, in comparison to the cowhide used on regular a baseball

How Are Baseballs Made?

The vast majority of baseballs today are made by the Rawlings Sporting Goods company (founded in 1887), which is run in Costa Rica. They have an exclusive contract to produce MLB baseballs and have done since 1977. Rawlings produces roughly 2.2 million balls every year, of which 1.8 million is sold to the major league and used throughout different leagues.

All materials are inspected before and after the manufacturing process, to ensure there are no defects that could hamper the quality of the ball.

The weight of the baseball comes from the tightly wound materials – layers of yarn, and the rubber which contributes to the core of the ball.

Watch this video, to understand better:

Every ball must go through quality control, which ensures that the weight, circumference, and design are all flawless. The balls must be consistent in quality – if not, this can impact the fairness of a game, as the baseball dimension and design all contribute to its performance. National League balls will also be quality checked by MLB.

In an interview with Kathy Smith-Stephens, senior director of quality and compliance at Rawlings, ThirtyFiveEight state that the director said that no change had been made to the baseballs, however, they continuously refine the manufacturing process in an effort to reduce variations.’ This was in response to allegations that Rawlings had changed some of their manufacturing practices.

How Many Pounds Does a Baseball Weigh?

The actual standard weight for a typical baseball is 5 ounces, or 141.75 grams, and the highest amount it can weigh is 5 ¼ ounces (or 148.83 grams). Since World War II ended, changes made to the balls were small, and this weight was decided upon in 2011 by Major League Baseball.

How Much Does a High School Baseball Weigh?

High school baseballs follow the same guidelines with official balls weighing the exact amount of 5 ounces (although this can increase to 5 ¼ ounces). In comparison, Little League baseball weights range from 4 to 5 ounces, in accordance with the ability of smaller players.

What is a Baseball Made of on the Inside?

The inside of an official baseball is made up of a cork, which contains rubber. This acts as the core of the ball. The core is wrapped in black rubber, with an outer casing of red rubber. The yarn then tightly encases the rubber, over which cowhide is then placed to cover the surface, with red thread hand stitched to keep it all in place.