How Many Stitches On a Baseball?

The process of making a baseball takes a number of steps to achieve the perfect finish. Attention to detail is key, and precision to ensure quality is crucial to American League baseball. Many fans of the sport wonder; what is a baseball made of? There are essentially a few core materials which contribute to the structure of these important sporting goods, which have been evolving as far back as the early 1800’s.

How Is a Baseball Made?

The entire process requires intricate handiwork, as well as the use of specialized machines. Here is a step by step process: 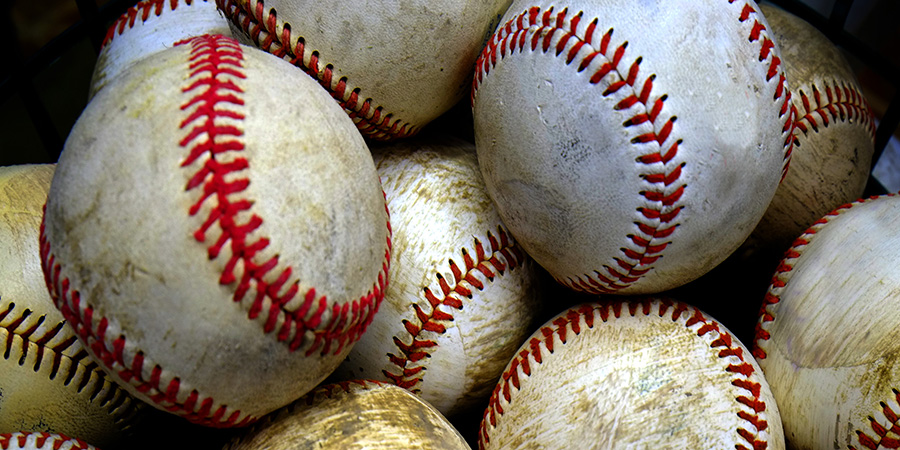 Using a rubberized cork, two hemispheric shells (also made of rubber) are attached to the cork, and red rubber gaskets are used to fill the space between the shells.
A red layer is then molded around the rubber hemispheres, creating the core, which is called the ‘pill’. It is molded into a perfect sphere shape. Once the shape is finalized, a thin layer of cement is applied around the surface. This is crucial in keeping the wool yarn attached to the pill before the cowhide is ‘wound on to the ball.
Using computerized winding machines to maintain the sphere’s high level of tension, the wool yarn is wound around the pill. The purpose of the high tension is to eliminate soft spots and ensure the surface is consistent. As the winding continues, the ball is weighed and measured until it reaches the official Major League Baseball requirements for size.
Three layers of wool yarn are wrapped tightly around the ball, in total 200 yards of yarn is used in this process.
The final step which completes the winding process includes using 150 yards of white finishing yarn which is wrapped around the wool yarn to protect and hold it in place. Machines then trim excess material and a thin layer of adhesive is used to attach to the cowhide covering.

Stitching the Baseball Together

Attaching the cowhide includes cutting two figure-8 patterns to cover each half of the baseball. To begin with, they are stapled to the ball’s surface temporarily. The cowhide will have been submerged into a solution to make it easier to mold and manipulate. Machines have not proven to provide concise enough stitching, so it is all completed by hand.

Using red thread, the cowhide is hand stitched to the sphere and is then run through a rolling machine to even out the stitching surface. After the baseball has been inspected and deemed fit for use, it will then be branded.

What Material is The Baseball Made of?

The material of a baseball consists of wool yarn, to wrap around the ‘pill’. There are three layers made up of:

The finishing yarn is made up of poly/cotton which seals and stops the previous three layers from moving. Cowhide, which is imported from the US, is then used, after going through a process of alum tanning to give it its white color. The cowhide is meticulously checked beforehand to ensure that there are no defects.

What are the Stitches on a Baseball Made Of?

The stitching is the component that stands out the most on a baseball. Each consist of 88 inches of waxed red thread, used to stitch the cowhide cover. Stitched by hand, 108 double stitches in total are required, equalling 216 raised stitches altogether. This process takes roughly 10 minutes for professionals to complete by hand.

The process and science behind why certain materials are required for baseballs have come about after years of trialing different sizes, dimensions, and designs. The stitches are a specific part of the design and contribute to more than just the aesthetics of the baseball.

How Many Stitches on a Baseball?

Stitched by hand, 108 double stitches in total are required, equalling 216 raised stitches altogether. This process takes roughly 10-15 minutes for professionals to complete by hand. The first and last stitch on the ball is always hidden.

Why are 108 Stitches Needed on a Baseball?

How many stitches are required equates to the size of the two parts of cowhide that are used?. To ensure that the quality of the ball is guaranteed and none of the material becomes loose, 223 cm (88 inches) of red thread is needed, double stitched, to keep the material sealed together.

Why are Baseball Stitches Red?

The reason baseball stitches are red is to aid players when trying to see the ball. Using bright, contrasting colors such as red against the white of the ball makes it clearly visible.

Before the 1900’s, the stitches were originally natural cowhide colors, but when the American League decided to make it’s official standard red, they changed the stitching of the ball to keep consistency and for visibility reasons.

Learn How Baseballs are Made:

The Mass of a Baseball

The baseball weight is between 5 and 5¼ ounces, which is between 142-149 grams. The weight of the ball originally started at 5½ to 6 ounces, which then changed numerous times during the 1800s. It wasn’t until 2011 that the current weight was decided on by the MLB.

The Volume of a Baseball

To work out the correct volume a baseball, the formula 1.33 times pi times the radius cubed must be used. According to two mathematic calculations, the volume would work out at 13.39 cubic inches.

The Velocity of a Baseball

The velocity and speed of a baseball depends on the situation, factors such as the weight of the bat, and the momentum in the swing can greatly affect it. “Bat Weight, Swing Speed and Ball Velocity,” PennState professor Daniel A. Russell stated, in part of ‘Physics of Sports’, released in 1980. The study found that bats weighing 20 ounces produced a batted ball velocity of 68.5 mph, while 40-ounce bats produced a velocity of 80.4 mph.

In 1839, when baseballs were first invented, they varied in weight, size, shape and form, as different manufacturers implemented their own styles and prototypes. It wasn’t until the mid 1800’s that baseball started to take on a more organized form, and governing bodies started deciding on a set structure for the balls.

The History of Stitching on a Baseball

The first baseballs made used yarn and leather to cover the ball, so stitches were required to hold the material intact, however, the number of stitches, or the color, wasn’t specified as ball sizes and designs differed from each other. According to Sportsrec, it wasn’t until 1974, when the MLB changed the ball’s cover from horsehide to cowhide, and the number of stitches would have depended on the dimensions of the material used on the original baseball.

One of the earlier editions of balls, which became popular, was named the ‘lemon peel ball’, due to its four lines of stitching.

Why a Baseball Requires Stitching

Stitching is essential to keep the material compact and secure. Not only do the bright stitches stand out to increase visibility, but it also plays a vital role in the trajectory of a moving ball. The interaction between the air and stitching causes drag, which allows players to control the orientation of the ball, as well as pitch in specific ways such as a curveball.

What is Baseball Stitching Called?

The current stitching pattern on a Major League baseball is called the figure-8,  devised by Col.William A Cutler. It is believed that the original idea was invented by a boy named Ellis Drake, in 1839, however, he never patented the design.

The pattern of the stitches follows the shape of the cowhide, which is cut into two figure-8 shapes. The cowhide needs to be dampened to increase pliability and using 88 inches of waxed red thread, the baseball is stitched by hand. The 108 double stitches are too intricate to be completed by the machine.

Making baseballs is a niche area of the sports industry – there aren’t many manufacturers that make the standard figure-8 design. The MLB buys exclusively from one company, and although there may be different versions available from cheaper companies, none will match the quality and sturdiness of the official Major League baseball.

Are Any Baseballs Made in the USA?

In the past, there were a number of companies that made baseballs in the USA, however now, the vast majority are made in China (excluding MLB baseballs). Ablert Spalding was the last company in the US to supply the National League. MLB balls are now manufactured in Costa Rica.

Where are Baseballs Made?

Major League baseballs are made in Costa Rica, by the company ‘Rawlings Sporting Goods’. They have an exclusive contract with professional leagues, and according to Reuters, they produce 2.4 million baseballs every year. More balls than needed are produced to make up for lost, damaged or scuffed balls that occur during play in league games.

How Much Does it Cost to Manufacture a Baseball?

According to CBC Sports, the cost per baseball to Rawlings is roughly $4. Roughly 36 thousand balls are produced per day, to meet the high demand required by Major League Baseball. They are then sold to MLB for approximately $7 per ball. Major league balls are sold at the retail price of $14.99.

Check this Interesting Video Out:

Why are There 108 Stitches on a Baseball?

Why are the Stitches on a Baseball Red?

There are two popular thoughts on why the color of the stitches are red. The first being that the National League decided to make its official standard color red, so naturally they also changed the color of the thread to match. The second is based on logic, players need to see the baseball, and so bright, contrasting colors were required.

Are All Baseballs Hand Stitched?

What are the Stitches on a Baseball Called?

The stitches are named after the pattern used; the figure-8. Due to the shape of the cowhide cuttings, the stitches curve round and follow the number eight structure. The placing of the stitches contributes to more than the appearance of the baseball, as trajectory and drag are also affected by the design.

How Much Does a Baseball Weigh?

With the diameter of a baseball being 2 7⁄8–3 inches, and a circumference of 9-9¼ inches, the weight of the baseball was decided at 5 to 5¼ ounces. Weights have varied throughout the years, especially between 1854 and 1871, with the final ruling by MLB taking place in 2011.