Often, coaches are concerned about strength, body composition, and condition, whilst agility is overlooked. Not being agile can hugely impact an athlete’s performance, from reflex reactions to being able to move quickly and effortlessly around the pitch. Using the right drills frequently can greatly improve a player’s agility skills.

What is Baseball Agility?

In baseball, agility is the ability to quickly assess the situation and respond accurately using a combination of reflex actions alongside skills learned through training. During a baseball game, this comes into play for actions such as starting speeds, high velocity direction changes, deceleration, and different areas of movement. 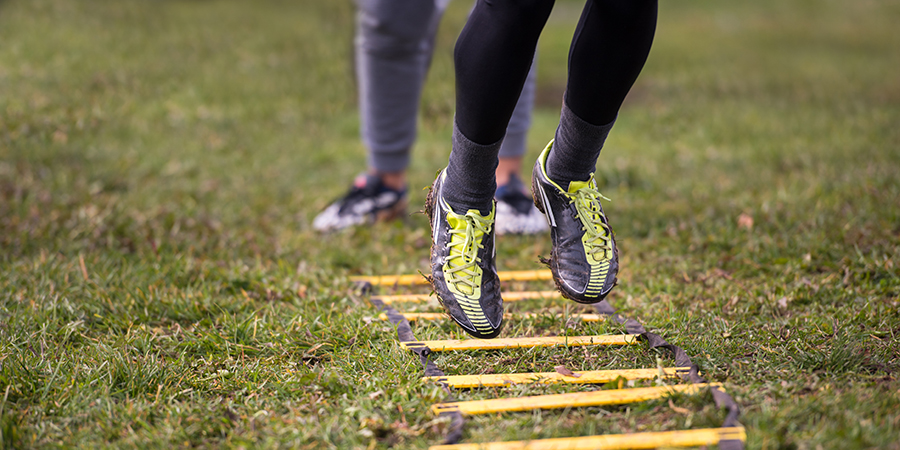 Agility also defines how efficiently and how quickly the athlete’s body can absorb forces and then redirect them. How agile a person is depending on how fast their body can go from absorption to action. This is known as ‘eccentric to concentric contraction’, which basically signifies the ‘load’ to ‘explode’ action. How agile an athlete depends on how quickly their body can transition from an eccentric (load) to concentric (explode) muscle contraction.

What are the Components of Agility?

Agility by definition is considered to be the act of moving quickly and with ease. This can also be applied to mental actions as much as physical. It’s clear to see when a baseball player has agility, their actions look smooth and effortless, and reactions seem to be second nature.

To achieve true agility in baseball, all these areas should be covered:

Having a good amount of strength
Having a well developed core
Mental agility as well as confidence and accurate prediction skills
Good balance from the upper to lower body, and from left to right side
Having excellent mobility
Having well developed mechanics and techniques
Having strong levels of total body power output

If an athlete lacks in even one of these areas, they can be considerably slowed down in their agility and reactions, thus affecting their performance.

There are two types of training skills that can be undertaken to help a player improve and get better at agility; rehearsed and reactive.

Rehearsed agility drills are choreographed and pre-meditated so that the player knows what actions they need to perform to complete the drill. Rehearsed agility is a great way to build confidence as well as consolidating motor patterns correctly, and ensuring the agility specific areas are ingrained into the player’s nervous system. Cone drills are often used for this type of exercise.

Reactive agility drills are often overlooked aspects of achieving true agility. The aim of reactive agility is to put the player into unpredictable situations and create a chaotic environment, in an attempt to reflect how unpredictable every baseball game is. This helps make the player’s mental reaction time become faster.

18 Agility Drills for Baseball to Make You Faster

There are a number of examples of agility exercises, including baseball agility drills with cones and baseball reaction drills.

Bunny hops require the use of traffic cones, and players will need to execute more leg power than necessary to run quickly around bases.

The coach will need to have five traffic cones available and will start by lining up three of them, 3-4 feet apart in a straight line. Players will be instructed to queue up behind the first cone and should stand with their feet together in preparation to jump over the cones.

The players will then each hop over the first, then second and then third traffic cones, and there should be enough space in between each cone for the athlete to land and then hop again over the second traffic cone. After players have completed the drill successfully, the fourth cone should be added at an equal distance away and players should start again, with the drill ending once the fifth cone has been put into play and the players have successfully completed the exercise.

Players should be also encouraged to use their arms to get them to them jump higher. Once the team has jumped over the five cones, each athlete should turn around and jump again, but in the opposite direction.

This drill is aimed at helping athletes in their sprinting abilities and ensures that they use the correct technique. Players should contract their hips whilst swinging the leg up towards the chest. The knee should be bent at 75-90 degrees. Players should then keep their hips square whilst they run, not allowing the pelvis to rotate or twist. The ankle should be dorsiflexed, where the toes are pulled up towards the shin as much as possible.

This is done as the knee is being driven up towards the chest. This puts the foot parallel to the ground, which reduces the risk of injury as the player hits the floor.

This drill is great to improve lateral quickness, similar to bunny hops, this cone drill exercise also requires the same setup. This time, athletes should jump over the first cone and continue until they have jumped over all five cones within stopping. Once this has been completed, they should then do it again but in the opposite direction. Using the arms to power the jumps should still be encouraged.

This is a drill that can be used for speed training for kids, as well as the bunny hop.

This requires the athlete to ‘pulse’ in the squat position before sprinting. This means their feet must be bouncing away from the ground, and when instructed, they begin to sprint. It’s used to increase pre-tension and improve athletes’ reactions to being timed.

Flying 30’s drill is aimed at allowing the player to gradually build up speed and get better at being able to run at max speed for a specified distance. The player should reach maximum velocity and be able to maintain it.

Place the first cone where the player achieves full speed. Then measure off a 30-speed zone and put down the second cone. The athlete should achieve full speed before entering the speed zone and then maintain that velocity.

2 Step Side Shuffle and Run

This drill is used to help develop coordination, quickness, and balance. It allows the athlete to be able to move in every direction, and strengthens their lower body and improves multi-directional movement.

Players should stand with their feet apart at hip distance, they should bend at the hips with their knees bent, facing forward with a neutral spine and lifted chest. Hands should be clamped loosely in front of the chest, and the athlete should then move left or right in small quick shuffle steps for a specified amount of time.

Acceleration and deceleration are essential agility skills to have, and for those wondering how to increase running speed for baseball, these types of drills are useful to know.

For this drill, have 4 cones set up, with the middle two slightly closer together. Players should be positioned leaning forward, with knees bent. Players should backpedal to the third cone, and when instructed to switch, they should accelerate forwards again, with a variation of switches available to be done depending on the drill the coach chooses.

Video Instruction for The Above 4 Exercises:

Speed, agility, and footwork are all incorporated into this drill. Baseball ladder drills are popular for coaches to use to help improve speed and coordination skills.

Practicing this drill frequently will increase a fielder’s agility when running and switching movements.

The coach should be standing 8 feet in front of the player, both facing each other. When the coach says ‘go’, the player should move forward slowly, left foot followed by the right. Once the player has taken two creeping steps forward, he should then run to his left rapidly.

See More Exercises in This Video:

Teams should be made up of pairs, and the players should be lined up along first and third base sidelines. Player one has possession of the ball and player two has to retrieve it.

Player two should backpedal along the foul line moving further away from player one with the ball, who should be holding it out at arm’s length. When player two sees his partner drop the ball, they should reverse direction and run forwards to retrieve the ball.

This should be repeated 10 times before the players switch roles.

Check This Video Out:

For baseball players, this exercise is aimed at helping athletes field balls that have been hit to them in any direction.

To create the drill, two long pieces of tape (around five feet long) should be crossed over directly in the middle, forming four zones of equal size. They should be labeled 1-4.

The coach should then call out jumping sequences, and the athletes, keeping their feet together, have to jump from one zone to the next according to the sequence.

If there isn’t a plyometric box available, coaches can make or use a regular box made out of wood. Players should perform this drill without wearing any padding or shoes. The box should be positioned in the center of an area, with a distance of 8 feet cleared around each side of the box. With the players lined up on from the side of the box, the first player should squat approx 8 inches from the box, with palms lying flat on the ground.

When instructed to go, the player should jump up from the squat up onto the box, landing on both feet. This should be repeated 10 times per person.

This is a useful drill for strengthening a player’s ankles and knee and involves athletes having to run around traffic cones in a figure 8 pattern.

Use five cones, arranged into the 8 figure. When instructed, the player runs through the cones, passing inside and out at various points. This exercise can be timed and should be completed for around 2 minutes at a time before spreading the cones further apart.

Push Up and Sprint Drill

This is great to improve all upper and lower body muscles. Using a soft surface like grass or a mat, the athlete should lie on his stomach with their palms pressed against the ground. On command, they have to push themselves off the ground and sprint about 30 feet, all in one motion.

Some coaches also incorporate the 8 figure drill, placing it all the end of the sprint for added training.

Linear bounds are used to help hip mobility and require speed and acceleration. It also helps with hip separation as one hip is flexed as the other is extending. The athlete should sprint using their arms for support and to propel forward, and wide strides are what will have the desired outcome on the hips.

This baseball sprint workout is used to build speed and help the athlete get better at sprinting. Players should run linear sprints of 10, 20, and 30 yards, with a 40 second rest in between sprints. For baseball players, it’s better for sprints to be no longer than 30 yards, and this drill can be done once or twice a week.

There are a number of baseball agility drills that athletes can incorporate into their training sessions. Baseball agility drills can include the use of cones, agility ladders, boxes, and short circuit workouts that use lateral movement. Some examples of these include bunny hops, figure 8 drill, and box jumps.

How Long Should an Agility Training Session Be?

Agility training should be done around four times a week to really reap the benefits and see an improvement in speed and reflexes. Each session should last between 15-20 minutes and should be performed after the warm-up routine.