How Many Baseballs Are Used in a Game of MLB?

Every child dreams of catching a baseball that belongs to his favorite team and taking it home to proudly show it off. Baseball is not only a much loved sport loved across the United States and Canada, but it is also the oldest major professional sports league.

A multi-billion dollar organization, MLB has viewers from around the world. In 2019 alone, just under 110 million people tuned in to watch MLB including the minor league games. From merchandise to collectibles, baseball cards and clothing, baseball is an establishment well rooted in today’s sporting world. 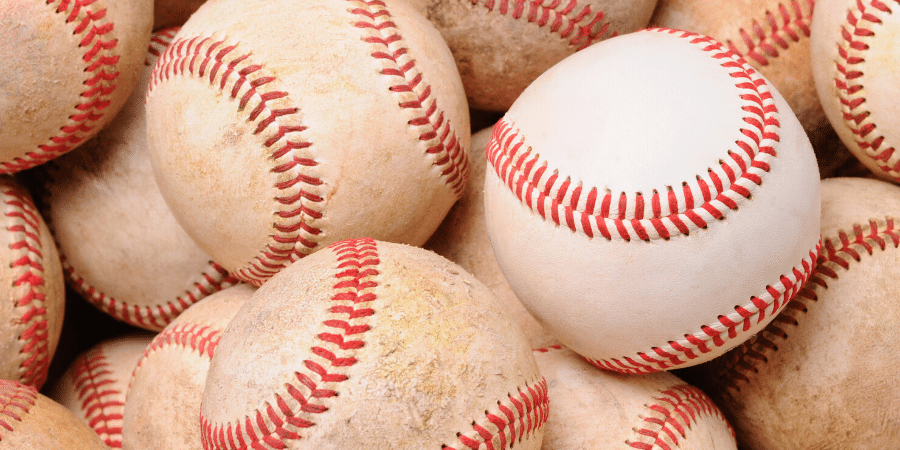 Hot dog in hand, a sea of colorful jerseys, the roar of the crowd, it’s a sport enjoyed by families and friends alike. Few are lucky to make it to see their favorite team play every time, and with the cost of food and beverages overtaking the ticket cost sometimes, its a testament to the thrill of the sport that entire stadiums remain packed during each season. But the average cost of a game ticket holds more behind it than just the admission fee.

Forbes totaled Major League Baseball’s revenue at $10.3 billion in 2018. An organization like this, which is considered the highest level of baseball, also has massive costs. Just the expenses on stadiums, food, and drinks, security and grounds keeping can cost millions and millions of dollars a year.

It is believed that in any given game, teams can go through over 100 baseballs or more. Taking into account the ball requirement for each game, as well the extras needed for infield practice, batting practice and autographs, it’s no wonder this is a huge cost to the league.

This could explain why buying an official MLB baseball can be costly for those who want to buy by the dozen in attempts to start a league with friends or family. The average cost online is around $15.00, which mounts up if a large number of balls are needed.

When compared to the amount of work put into creating each ball, they are relatively inexpensive. The Rawlings company, based in Costa Rica, has made all the baseballs for the MLB for over 50 years. Considering how many baseballs are used in an MLB game (on average 10-12 dozen per game), it’s no big surprise that the league orders in bulk.

Most of the ball is handmade, such as the stitching. Machines are required to make the core of the ball, and each ball must look identical by the end of production. The standards are high, so the staff needs to be consistent and focused. They are given incentives, due to the demand for how many need to be produced each day. If staff exceed their daily requirement they are rewarded with a small bonus.

The cost of buying a ball in a local sporting shop can double that of what the league pays, making it considerably more expensive. So how much does a MLB baseball cost? The cost per baseball is around $7.00 each, and almost one million baseballs will be purchased each year. Taking shipping costs into account, over the course of a year, the league spends an eye watering sum of $10 million on baseballs alone.

Check this video out:

How Many Balls Are Used in 1 MLB Season?

Per season, MLB teams will go through around 900,000 baseballs. There are 30 major league teams, and each plays 162 games. Therefore, each season consists of 2430 games. This is not including playoffs and world series games. At a possible usage of 120 balls a game, for a standard nine-inning game, it all starts to make sense why each ball is an added cost.

This area is one of the biggest expenses that the MLB face and future predictions show that this could rise. As players rise on base percentages, hits will increase meaning more baseballs will be needed.

This hasn’t always been the case, however. Back in 1988 (when the first pitch count ever was recorded) the amount used each game was less. It averaged at around 135 pitches each game, compared to results shown in 2008 which had shown an increase of 10 pitches in each game. Since then, batting averages have increased, meaning increased baseball usage for each game.

Why is this Number of Baseballs Needed?

Without taking into account how many are needed for each game, the demand is already huge when factoring in spring training, batting practice, infield practice, and extras needed for things such as relief pitchers warming up.

Each baseball has a game life span of around three pitches. There are a number of reasons why each game runs through 10-12 dozen baseballs. Those that have hit the dirt are changed straight away. It is believed that dents, scuffs, and scratches can affect the trajectory of the ball. Another reason for them being immediately discarded is that if it is dirty, it is harder for both the cameras and the batter to see.

For the lucky fans, home run and foul baseballs will go home with them, as well as generous players throwing out balls to the stands. Alongside this, pitchers can request a new ball whenever they want, and other balls are also required for relief pitchers to warm up with.

Some will be thrown out at the discretion of the home plate umpire if he deems it unworthy of going into play. Under the Umpire Duties rule, 4.01, an umpire is required to throw in new equipment in three circumstances:

A baseball has been batted out of the playing field or into the spectator area
A baseball has become discolored or unfit for further use
The pitcher requests an alternate baseball.

This would account for a large number that each team uses throughout the season. In addition to these reasons, a number of baseballs will be required for publicity and fan events, such as autograph signing and competitions. The team may use a ball that is brand new or one that has been in play depending on the occasion.

What Happens to Baseballs Used in a Game?

With the number of baseballs needed per game, a common question that gets asked is – what do they do with used baseballs? Baseballs that are out of play are brandished with an “X” or have the words “brand new” on them. This stops them from being confused with baseballs that are going into play.

The home team is responsible for providing the balls, as a way to stop teams having to carry lots of equipment around every time they travel for a game. They will be responsible for making sure the equipment is up to scratch and play worthy for both teams.

Have a look at this video:

Before each game, every single baseball will be rubbed using special mud, to increase its grip for the pitcher. An umpire will usually do this, sometimes alongside their crew or alone. In other cases, they may hire an employee to undertake this job, but the umpire should still oversee the rubbing to ensure that every ball is meticulously coated. They will then go into buckets, or totes, which will keep the new, scuffed and out of use from mixing.

In efforts to avoid wasting unused and discarded balls, they may be kept for batting practice or infield practice. After this, they will be sent down to the team’s minor league operation and used in their batting practice. Some will be kept, and an authenticator will mark who hit the ball (if it was hit) and who pitched it. Using a serial code, this can then be sold online or at the team’s merchandise store.

Baseballs that have been part of history-making games can sometimes be sold as memorabilia. The most expensive baseball sold for $3.2 million dollars. As well as memorabilia, collectors are interested in snapping them up to add to a collection or sell on if it was a famous or even infamous game.

Some that are kept by the team may be sent on to the team’s hall of fame/museum, to be remembered as part of their legacy.

What is the Most Baseballs Used in One Game?

According to an MLB equipment manager, up to 120 baseballs can be used per game. This is due to the number used up between home runs, fouls, scuffs and from players tossing them to the stands. This can increase if the game goes into extra innings.

How Many Balls are Prepared for a Major League Game?

Considering how many baseballs are used in 1 MLB game, at least 10-12 dozen need to be prepared. The home team will be expected to provide them, and extras may be brought just in case. Any that haven’t been used will be kept for the next game.

How Much Do Major League Baseballs Cost?

The average cost of a baseball, bought in a sporting goods shop, will be around $15.00. The Major League Baseball cost per ball is considerably less, around $7.00 because they buy in bulk from The Rawlings Company based in Costa Rica. For the most part of their production, they are hand made and require a lot of attention to detail to make sure each one is identical.

Each and every baseball is valuable. Time and money have both been spent to ensure that only the best is used during a game. Some may argue that the amount is too high, that in previous years, players and umpires weren’t as quick to change a baseball if it dropped to the ground.

Others will counteract with the fact that many of them go on to be reused throughout the league in the forms of practice and fan prizes and team and player memorabilia. One thing is for certain though, while there might be millions of them bouncing around out there, catching one when in the stands never loses its thrill.