What is an Error in Baseball?

The definition of an error, mainly a fielding error, happens when the batter should have been put out (ex. Due to a third strike), but hasn’t been declared out due to the decision of the official scorer, that a fielder has misplayed the ball, leading to the batter or baserunner to proceed to the next following base. Go ahead and take a look at the Errors in Baseball Stats in this 2017 Fielders Statistics for the MLB before we get to discussing more on errors.

The History of Errors in Baseball

Errors in baseball used to be a statistic to “quantify” the skills of fielders. Errors used to completely be based on environmental or surrounding interferences. Hence, after World War II, when baseball fields became more expensive and taken care of, things like smooth artificial grass, the availability of heavy equipment to be used to perfect the field as well as artificial lights in a night game of baseball all came together to lessen the amount of errors fielders would experience. 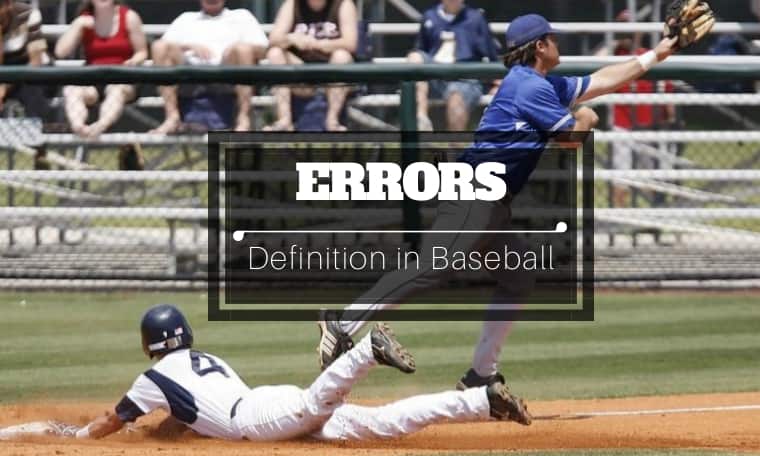 You can think about it this way; if there was something that directly caused a fielder to make an error, the fielder must have done something pretty skilled to be able to at least deliver an attempt of the play. A fielder who is not so good, would probably avoid making the error all together if they suspect that failure to go for the play will cause being marked an error, so you don’t really think of errors as actual mistakes, instead, you can see them as a sort of brave attempt to not let a stolen base happen for the opposing team.

Run Batted In (RBI) and Hits On Error

You as a batter do not receive an RBI if you score a run on an error, but any preceding runners before you that are already out on bases are free from this and any of their run scores are counted as RBI.

If the reason for you scoring a run is solely due to the fielder error, then your run will be marked as the “hit on error” which lowers your batting average since it would basically be the same as if you were struck or fielded out. This can affect your Earned Run Average (ERA). But if the official scorer sees that you would have reached first base or 2nd and 3rd base or even the possibility home if it weren’t for hindrances and mistakes caused by a fielder, your play will be scored as a regular hit for you, and a separate error.

A whole play can be marked as a fielder’s choice if you have a runner fielded out but deemed safe due to error, while you as the batter have already reached a base. You won’t get awarded a hit but the opposing team will be given an error on the play.

Passed balls and Wild Pitches, contrary to popular belief, are not errors nor are they errors on catchers since they are considered to be “Acts of Pitching” rather than misplays of fielders. A catcher can make an error, however, when he does something that interferes with a batter in ways such as the glove touching the bat during a swing, being too close, and other detailed mistakes that could directly affect or hinder the performance of a batter.

You’ll probably need a visual after taking in all this information to help you put the pieces together, so here’s a video of the Worst Baseball Errors 2017 .

To make it even more interesting, check out this video of MLB Little League Home Runs on Errors: