What Does PO Mean in Baseball?

Abbreviations and terminologies for baseball are important to understand if you want to become a better player and a popular question we come across all the time is what function does ‘putout’ or PO serve in baseball?

We’ll attempt to answer this question by giving you an easy to digest definition and its function. 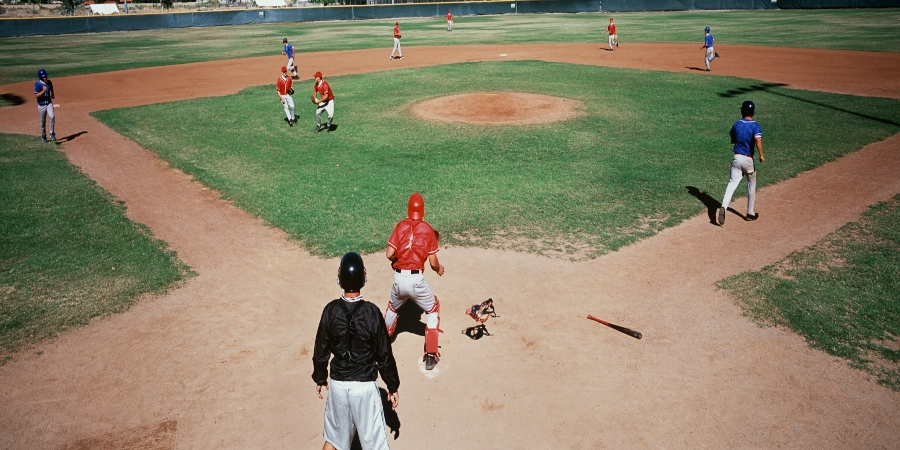 We’ll also discuss another related baseball term and we’ll end with some other questions to further increase your knowledge to become a more well-versed player yourself.

In very simple terms, a putout is when a fielder is accredited with getting the offensive side’s batter or runner out. There are many ways players can get this credit and some common ways include:

We’ll look at each reason in a little more detail.

A flyball is when a batter lobs or hits the ball in a way that makes it airborne. If any of the defensive players catch the ball before it hits the ground then the dismissal of the batter would be called a flyout. Flyouts can happen anywhere, even in the foul area. The player that catches the flyball is accredited with the putout.

A strikeout is when a batter misses the pitch on the final strike. This is a putout that is accredited to pitchers as they are the ones that threw the ball that missed the batter’s bat.

Tagging a Base for a Forceout

When a batted or ground ball is caught by a fielder and then tagged on the base it’s known as a force out. The putout is accredited to the fielder that tags the base.

Tagging a Runner for a Tagout

This is very similar to a forceout but the difference is that instead of tagging the base, the fielder tags the runner to signify the out. The fielder that performs the tagout is accredited with the putout.

Tagging a Base On An Appeal Play

An appeal play is when the defensive side calls the umpire’s attention to a rule violation. Catching the ball and tagging the base on an appeal play gets a putout that is accredited to the tagger.

Being Close to a Runner During Interference

Interference is when the batting team is reprimanded by the umpire for interfering or obstructing any fielder or procession of play. A fielder that is positioned near a base runner that has been accused of interference gets credit as well.

Learn About Runner Lane Interference Rule by Watching This Video:

Put Out vs Assist

Another thing that might confuse some people is the distinction between a putout and an assist. This difference is fairly easy to understand.

An assist is an action a player does to help other position players reach a putout. A good example of this is when a fielder throws a pitch to another player that tags a base to get the runner out. In this case, the fielder that threw the ball will be accredited with the assist.

Assists are awarded as long as the fielder touches the ball even if it’s unintentional. Pitchers however are not awarded assists for strikeouts.

Does PO mean ‘pitcher only’?

Yes, it does but only in certain situations. In major league baseball and in most professional leagues, PO mostly refers to a putout. But in high school or college league level baseball, college coaches can use ‘pitcher only’ to refer to a player who specializes in pitching.

What is a PO in High School Baseball?

Like we previously mentioned, high school and college coaches refer to a specialized player that knows how to pitch well as a ‘pitcher only’. This is a controversial practice depending on who you ask. Some people say that a player should work on all aspects of the game, to better increase their understanding and to also have a better chance of making it to the big leagues. Others say that just focusing on one particular aspect and getting really good with a ball or a bat is what’s needed to become truly exceptional and will make the biggest impact on your future success. Either way, it’s a common practice in high school baseball.

What Does SO Mean in Baseball?

Some people might confuse SO with PO as it sounds like a similar baseball stat, but it actually refers to a ‘strikeout’. We’ve covered strikeouts and their use case before in this article and SOs are a form of a put out that is awarded to the pitcher for getting the third strike when a batter misses the ball with his bat.

We hope this article helped clear some queries you might have had about PO and its meaning and usage in baseball.

Be sure to check out the rest of our site for more information on various topics related to baseball. Whether your a seasoned player or merely a beginner, our resources will help you increase your knowledge and will help you reach your true potential as a ballplayer.