Certified BBCOR Bat: Everything You Need To Know

Batted Ball Coefficient of Restitution or BBCOR bat is a term that gained its popularity in 2011 in the field of baseball. For those who are asking what are BBCOR bats, then you came to the right place.

First, these bats became popular and accredited in high school and college baseball in 2011. The NCAA(National Collegiate Athletic Association) and the NFHS(National Federation of State High School Associations) has certified this type of bat as the requirement for, not only college baseball, but also tournaments. The first bat standard used is the Bat Exit Speed Ratio (BESR) which is now changed to the Bat-Ball Coefficient of Restitution, which is commonly known as the BBCOR. 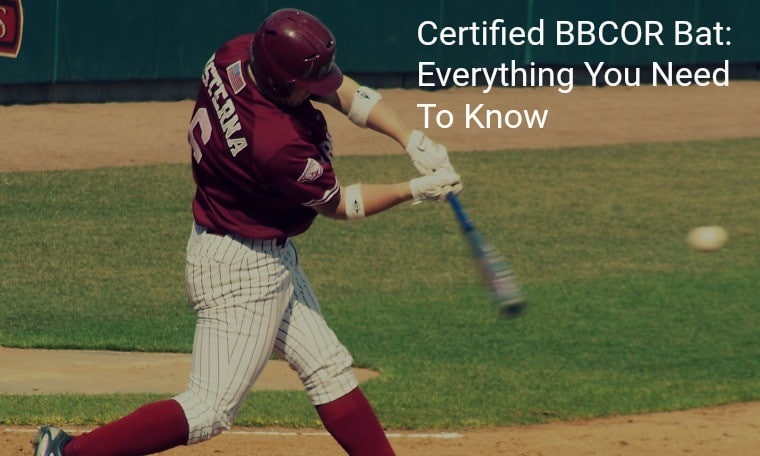 History of The Baseball Bat Certification

Baseball bats vary according to the material and standard application. It is important to note that before the BBCOR standard was used, there were two previous standards used. As previously stated, the first standardized bat design was the BESR. The certification was required by the NCAA for bats which weren’t made up of wood. The name comes from the concept that there is a ratio of the speed of the ball as it moves away or exits after being hit by the bat.

Moreover, the Accelerated Break-In(ABI) test is another bat certification approved by the NCAA. The process involves identifying the minimum or maximum hits that a bat can take before it breaks. The break-in test focuses on assessing the maximum performance of the bat by hitting balls 500 times.

The test can also involve the bat rolling assessment. The process involves placing the bat in-between two rollers and pressure is slowly increased to squeeze the bat. Another technique used in the past on the bats is to compress the bat without using the aid of rollers.

Video on the Bat Rolling Process:

However, these certifications have been diminished. The BBCOR assessment test is now being used to certify bats. A focus on this certification process will be discussed in the later parts of this article.

What are BBCOR Bats?

As we have answered the question of what does BBCOR stands for on baseball bats, it is important to focus on the meaning of this certification to the committee, players, and coaches. First, the process identifies velocity after impact against the velocity before the impact. The collision between the ball and the bat is identified during this assessment, specifically the coefficient of the values.

Knowing the meaning of what does BBCOR stands for also raises a question as to what are the pros of the bat. The number one advantage of the bat is that it’s more durable than its counterparts. Its durability comes from the fact that it’s tested multiple times.

It has also been reported that it helps enhance the performance of the players because it allows the player to hit more hits on the field. However, skills and tools should also match to achieve high performance.

Moreover, the more durable the bat, the lower risks there is for the players. Moreover, there have been fewer reported injuries on the field since BBCOR bats started being used.

The downside of using BBCOR bats is that there have been reportedly lower home runs. Moreover, for those asking do BBCOR bats lose pop, the answer is yes. The bat, though the standard used in the field, is considered to be the number one enemy of every hitter on the field.

The pricing of bats can also be considered as a con. It is more expensive than the past standardized bats which makes it difficult to obtain.

Aside from knowing what does BBCOR mean in baseball, knowing why it is important in the sport is also a piece of vital information. The certification is the only baseball bat certification, since 2011, which meets the requirements of the NFHS and the NCAA. If you’ve ever wondered “Are BBCOR bats legal for high school?” the quick answer to that is yes. The bat must have a -3 length to weight ratio and 2 5/8 barrel to be legal.

To simply put it, the aluminum or non-wood bats must pass the accreditation in order to ensure that the players will experience minimal spring-back effect as they use the aluminum bat. The stronger the spring-back of the bat means that it provides an advantage to the batter which is unfair to the other team. This effect is primarily provided by wooden bats. However, BBCOR aluminum is more preferred than wood bats in the field.

So, why don’t they just use a wood bat? The answer is that wood bats are heavier. Aside from this, it can also break and cause the player to get splinters. Therefore, we can derive from this the BBCOR definition, which is a lightweight bat made up of aluminum that provides or results in a lesser spring-back rate.

Similar to other bats, the BBCOR bats have the same parts as that of the usual bats. However, to answer what is a BBCOR baseball bat made of, here are some of the materials used for these bats. Everyone like aluminum bats except MLB. Makes you wonder why does MLB not use aluminum bats? Probably because injuries and everyone having an insane amount of home runs!

These are bats purely made from aluminum. However, the shape and closure on the two ends resemble a wooden baseball bat. Nonetheless, its core is hollow and has a stiff handle. There are some aluminum bats that have wood at the core.

Have you ever wondered what are BBCOR baseball bats made of? I have the answer for you!

The maximum acceptable length to pass the BBCOR certification is 36 inches. The barrel must also have a maximum barrel diameter of 2 ⅝”. In terms of weight, -3 is the maximum ratio of the weight and length of the bat.

A one-piece baseball bat is made entirely made in a continuous manner that closes on both ends. It is highly suggested to use a one-piece bat, especially for professional baseball because it’s more durable because of the absence of damping. The downside is that hitting the ball will definitely hurt because it’s hard.

Two-piece baseball bats are made up of a detachable handle and barrel. These two parts can either be made of different materials or the same material. The upside of using this type of bat is that it results in lesser reverberation during mishits. Knowing what is a two-piece BBCOR baseball bat made of is also easy to determine..

How to Break In BBCOR Bats

Actually, breaking both BBCOR and non BBCOR bats has the same process. Here are the three basic steps:

Tap all the surfaces of the bat gently. Avoid hard hammering because it can cause dents on your bat. It can also affect your new bat’s surface which can eventually affect its performance.

After tapping the entire surface, you can now start increasing force. Start hitting your bat harder each time.

Start swinging your bat hard or with increased force. Make sure to hit the ball accurately to ensure it break’s in. It’s best to start swinging at least 150 times while soft tossing with someone else.

Check this Video Out:

After getting at least 50 good hits while soft tossing, your bat should be good to go. However, if you think that your bat is still not fully broken, then hit and swing more before you start using it in the game.

If you are asking, do BBCOR bats need to be broken in and why it’s important, then we’ll tell you. It is important because new composite bats cannot be used to its full extent if you haven’t gotten at least 100 hits with it.

Yes, your baseball bat is made with a standard manufacturing process, there’s no question about that. However, these bats aren’t tested right after they come out from manufacturing. That’s why it’s important for you to test and break-in the bat first.

Now you have an idea or a working knowledge of what are BBCOR baseball bats; it’s now important to look into the best baseball bat brands on the market.​

With the word “beast” on its name, it’s clearly a bigger one compared to the previous bats by Easton Mako. The barrel has a length of 1.5” which provides stronger power and wider coverage for an outside pitch. Though it increased its weight, the bat still maintained to have the lowest swing weight among the Easton bat line.

Considering that it’s still new in the market, the bat’s price is slightly a con. Other users also stated that the grip of the bat is thicker which makes gripping a little weird.

One of the main advantages of the Solo 617 is that it has a Speed Ballistic Composite (SBC) cap. The cap helps in delivering a low moment of inertia. This feature then produces the fastest possible swing that other Louisville bat does not have. It also gives the batter a great balance which is what is BBCOR baseball bats often provide.

The most reported cons of this bat are not with its performance but with its color. Considering that the bat is white, it can easily get dirty. However, with its advantage, cleaning it is definitely just a minor inconvenience. 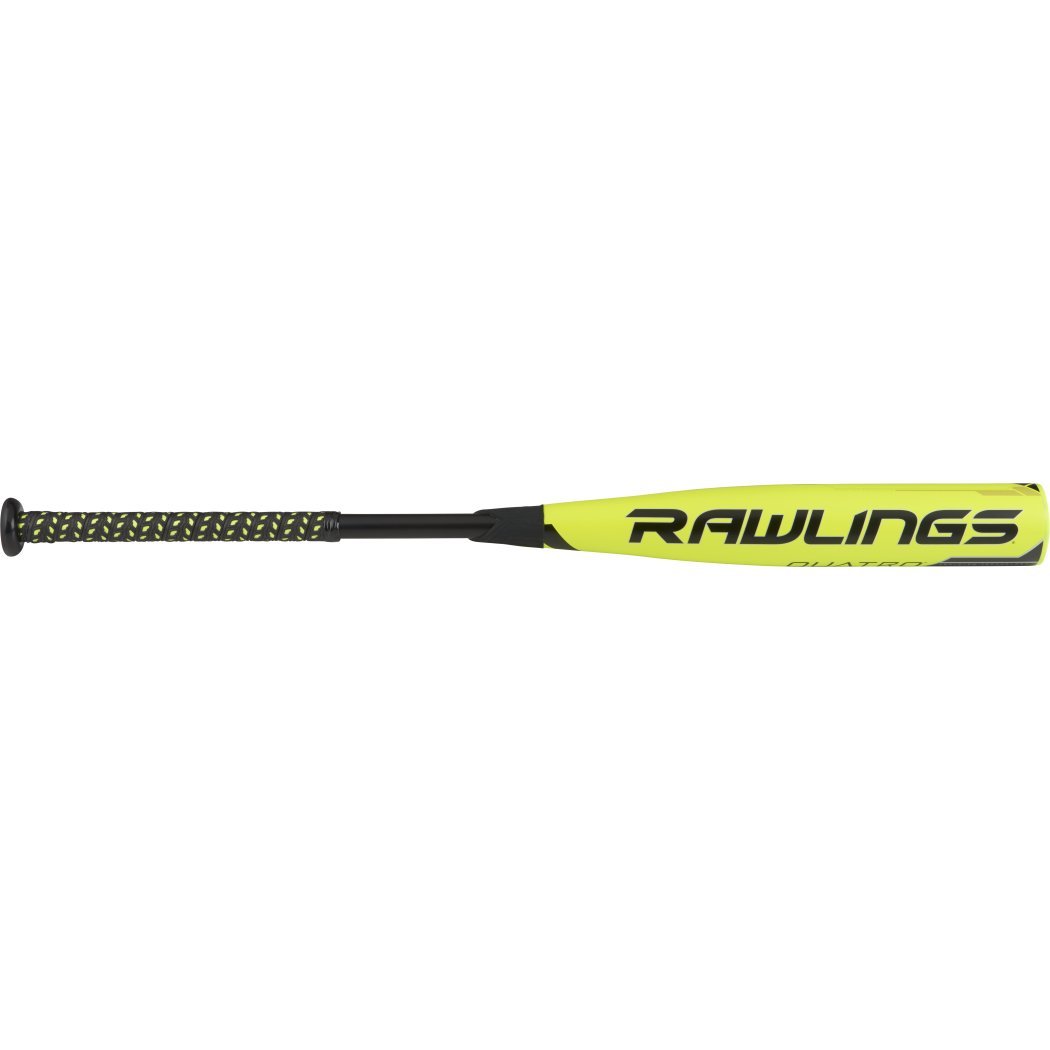 The Quatro, compared to the other Rawlings bats, has the longest barrel. This is great for the middle of the lineup hitters as it provides the highest performance with the most distance. Aside from this, it also has the focused flex technology which is exclusively patented by Rawlings.

The price point of the bat is quite expensive compared to the bats within its line. This is considered to be the most reported disadvantage of the bat, but its performance often outperforms expectations, so the price is practical and understandable.

How to Choose the Best Bat?

The first thing you should consider is that the brand you choose is BBCOR approved. So, now you know what BBCOR means,  you’re now off to choose your brand and model. Though we’ve introduced some of the best brands and models earlier, your personal preference still matters.

Nonetheless, for first-time buyers, here are some of the important things you should consider.

Now you know what BBCOR bats are and the importance of these bats, you can now start hunting for the right baseball bat for you and your kids.

Make sure to choose the right baseball bat length according to your body. To do this, first, measure the length of your index finger to the center of your chest. Once you have acquired the measurement, you can refer to the table below:

This chart should answer your question on “How to determine baseball bat length?”

You can also manually test out the bat to see if it’s the right one for you. To do this, hold the BBCOR bat to your side. Determine if you can reach the handle while holding it to your side, if yes, then that’s a right bat size for you.

Lastly, you can also place the bat at the center of your chest. Place the bat facing outward and stretch your arm and hold the barrel. If you can do this, then that’s also an appropriate size bat for you.

Now you know everything about BBCOR bats and why they’re important, make sure to choose the right bat the next time you purchase one for you or your kid!