For many players, from youngsters to professionals, the right glove is an essential piece of their uniform. The first thing to consider is that the glove should have the right fit. More than that, the quality, features, style, and design also have to help the wearer perform well in whatever position he is in the field, be it infielder, outfielder, catcher, or pitcher.

When it comes to gloves or other baseball gear, Wilson is one of the most trusted brands, even among MLB players. Two of the most popular gloves in the market right now are the Wilson A800 Glove and Wilson A900 Glove, with numerous professional and amateur athletes using these series. We will discuss what sets the two gloves apart from the competition and each other. 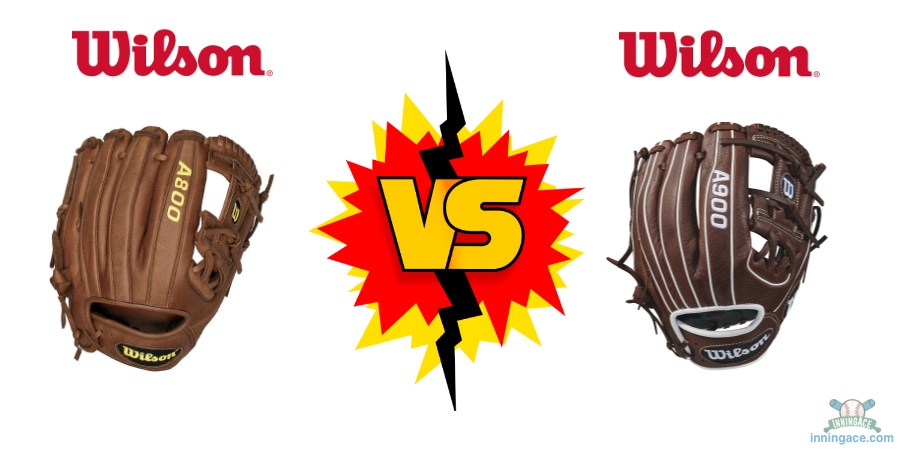 Wilson A800 1786 Infielder'sBaseball Glove CHECK LATEST PRICE
If you click this link and make a purchase, we earn a commission at no additional cost to you.
Table of Contents show

Wilson A800 1786 Infielder'sBaseball Glove CHECK LATEST PRICE
If you click this link and make a purchase, we earn a commission at no additional cost to you.

The A800 was first released in 2015. The glove has a cool, retro-looking design and is made with dark brown and blonde leather. It comes in a variety of sizes and features double palm construction and dual welting that make it durable in games and maintain its shape after use. The series was developed after countless conversations or consultations with hundreds of professionals.

The A900 glove was released less than two years after the Wilson A800 glove. Just like the previous series, the A900 has an old-school look and is constructed similarly. Some customers have provided positive reviews about the glove for its quality and ability to hold up even after months of heavy use on baseball fields.

While the two baseball gloves have plenty of similarities, particularly in the features and materials used, they are still fundamentally different. If you are planning on buying a glove, here is a comprehensive comparison between the Wilson A800 vs A900 gloves. The reviews below are divided into various categories to help guide you in determining which of the glove options suits your preference.

Table Comparison Between Wilson A800 Versus A900

One of the most essential things to consider in looking for a glove is determining the type of webbing or the tightly woven piece of leather that connects the thumb to the pointing finger. The webbing or web pattern defines the structure of the glove and affects how well the player is able to catch fly balls, pop-ups, or line drives. Among the categories here, the webbing is where the two series contrast the most.

The A800 has an H or I webbing. It is most commonly seen in gloves used by infielders because the webbing allows the player to snag and retrieve the ball more quickly after the catch. This lets players make ball transfers efficiently. The H-webbing is known for its sturdiness and flexibility while allowing the players to see through the web pattern and make it easier to catch high or fly balls.

The A900, on the other hand, is constructed with a pro-laced T-webbing. It features a tightly stitched pocket, with a single piece of leather stitched between the thumb and forefinger. Although it generally has a lower weight than gloves of a different web, the A900 provides better support. The glove series is ideal for those playing in both the infield and outfield positions.

There is not that much difference in terms of design or style between the two gloves. As mentioned, they both have double palm construction and dual welting, which increase the pocket stability of the gloves. Moreover, they have a low profile heel, offering players increased flexibility as the palm and pockets can easily be opened up.

A contrasting feature between the two is that the A800 gloves have a single post web with a half-moon reinforcement that helps ensure the ball stays right on the web.

Another difference between the two is the weight. The A800 has a lighter average weight of 1.3 pounds, with the A900 clocking in at 1.5 pounds.

Several customer reviews have shown that the gloves come at a reasonable cost, considering their quality. However, the A900 is generally more expensive than the A800 because the former is made with advanced technology and construction.

The A800 and A900 gloves have good leather quality as the raw materials used in making them are top class. The soft feel of the glove on the hand has players heaping praises on the equipment. Furthermore, the leather is long-lasting, making the wearer feel the high quality of the glove for an extended period of time.

Players require a specific glove size, depending on the position they are playing in. For example, players on second base, shortstop, or third base would perform better with gloves from 11″ to 12″. Pitchers and first basemen, on the other hand, typically use 12-inch gloves. For players in the outfield, larger gloves are recommended.

Both the A800 and A900 series come in different sizes, which means the gloves are available for a wide variety of players. There is also good news for youth players or those whose hands are of smaller size because of the Wilson A800 Pedroia Fit and Wilson A900 Pedroia Fit. The models were named after MLB All-Star and World Series champion Dustin Pedroia, who is known for having one of the smallest pair of hands in league history.

The series also has some of the best youth catchers mitts. The specific models are the Wilson A800 Catchers Mitt and Wilson A900 Catchers Mitt. Their sizes range from 32″ to 34″ for both series.

Availability for Both Hands

Like many gloves, Wilson gloves are available for both hand orientations. The same can be said for both the A800 and A900. However, there are some sizes and webbing designs that are only available for the right-hand throw choice. For left-hand throw gloves, you would sometimes need to search deeper in e-commerce websites.

Most gloves require a player to break them in properly before it is used on baseball fields. It usually takes some time and work and necessitates the use of a guide to making sure the break-in is done correctly. This is not the case for the A800 and A900. Because of the leather quality used in the gloves, they require a minimal break-in period. This can save players a lot of time.

There is a slight difference between the break-in length between the A800 and A900. The latter needs a little less time and work to break in.

Watch the Video Below:

A800 and A900 is the perfect option for young players or those who are still learning the game. The comfort the gloves provide the wearer allows him or her to perform to the best of his ability on the baseball field. Even those who have already become adept at the sport can still make good use of these gloves.

All things considered, the A900 is the better alternative between the two Wilson gloves. Still, there are situations wherein the A800 would prove to be the more appropriate option.

Wilson A800 is Better for Beginners

For those who are still starting to learn the sport, the A800 would be more apt because it is less costly while still serving its purpose of providing the player comfort and support. On top of that, the glove is able to help him or her improve his or her game. It is also a good option for parents who want to play catch or casually with their children.

Wilson A800 1786 Infielder'sBaseball Glove CHECK LATEST PRICE
If you click this link and make a purchase, we earn a commission at no additional cost to you.

Wilson A900 is Better for In-Game Performance

Because the quality of the A900 is higher, it is better for those who want to maximize their performance during games. From catching fly balls and line drives to ball transfers, the wearer will be able to perform at a higher level. The A900 has some of the best infielder glove models, as well as outfielder ones, in the market.

What is the most used glove brand in MLB?

According to a 2019 study that polled starters from various professional teams, Rawlings is the most used brand in the league. In fact, 54 percent of the respondents use gloves made by Rawlings. Wilson is a far second in the poll of the most worn gloves, with 34 percent of starting players stating that they use the brand.

What are the most expensive baseball gloves?

There are three answers to this question. The most expensive glove that is available in the market for baseball players is the Rawlings Primo model, which carries a price tag of $450. It is constructed with two layers of top-quality Italian leather. It has strategically placed breakpoints to maximize a player’s movement capabilities and allows hands to close naturally upon ball impact. It is also known for its durability, especially in comparison to other gloves.
There are even more expensive gloves, but most of those are not used by players in regular games. The most expensive one sold on record was a boutique glove sold by luxury goods manufacturer Hermes. The glove, which was made of gold swift calfskin, had a single-post webbing, and took 25 hours to stitch was sold for $14,100.
The most costly glove ever put up for sale, however, was sold at an auction. The glove sports icon Lou Gehrig wore in his last professional game fetched a hefty bid of $387,500 in 2011.

Buying a glove is a matter of personal choice and, of course, depends on the position the player plays in. The Wilson A800 and Wilson A900 Glove series are popular among youth and aspiring players because of their top-notch quality. Their pocket stability and low-profile heel contribute to the durability and flexibility of the gloves. The series is also known for the versatility of options and designs available, allowing a player to select which glove fits him best.

If you’re up for exploring more options the Wilson brand delivers, check out our comparison of the Wilson A2K vs A2000 baseball gloves series.