Marucci CAT 8 Vs. CAT 7: Rundown of Their Differences

Marucci has been rolling out high-quality bats ever since the company’s founding in 2004. In 2009, the company released the CAT series, which has been well-received among amateur players, both young and old alike. The series began with CAT 5, which was named after the strongest-grade storm classification. Several improved models have developed almost every year.

Two of the latest in the series are the CAT 8 and CAT 7. We will discuss below the two baseball bats and provide a comparison to help you determine which between the Marucci CAT 8 vs CAT 7 is the ideal choice of the bat for you. 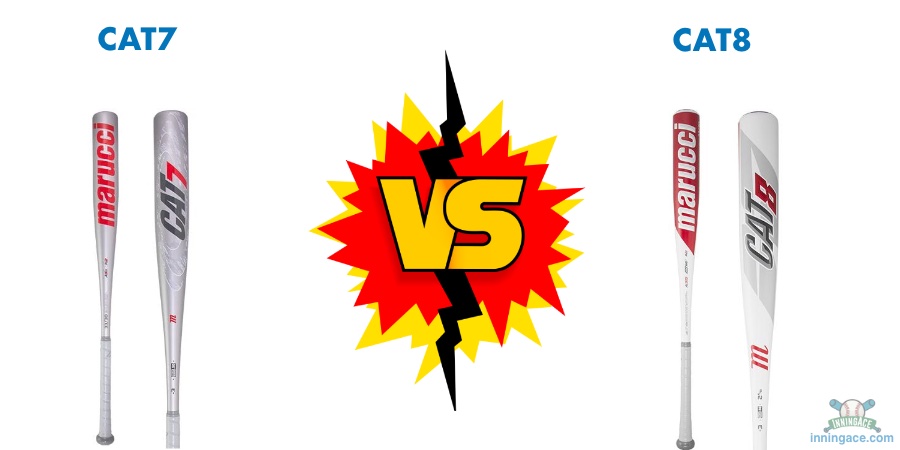 Marucci CAT8 BBCOR Baseball Bat: MCBC8 CHECK LATEST PRICE
If you click this link and make a purchase, we earn a commission at no additional cost to you.
Table of Contents show

Marucci CAT8 BBCOR Baseball Bat: MCBC8 CHECK LATEST PRICE
If you click this link and make a purchase, we earn a commission at no additional cost to you.

The CAT 8 lines have two available versions, which is common for bats that come out of Marucci: BBCOR bats and USSSA Youth Big Barrel bats. The basic CAT 8 BBCOR and CAT 8 USSSA bats are made of a one-piece alloy and give off a stiffer feel compared to other baseball bats. They offer a high level of bat control, swing speed, and exit speed.

Third in the CAT 8 line, the CAT 8 Composite is Marucci’s first 100% composite bat. The all-composite barrel has a mid-loaded swing weight that is not too densely distributed toward the handle or end cap. This allows you to enjoy enough swing speed. Its ideal barrel length also offers hitters a bigger area of thinner walls, which is known in baseball circles as the “sweet spot.”

Two years prior to the development of the CAT 8, the best the brand had to offer was the Marucci CAT 7. It is made with the AZ4X alloy, which allowed a barrel design of up to seven variables of wall thickness. These many variable wall thickness entailed a larger area of thinner walls, doubling the sweet spot as that of the series’ predecessor, the CAT 6.

The basic CAT7 baseball bat is a one-piece bat that has increased tinsel strength and a higher response rate than other bats of the same level. It is ideal for batters who love high bat speed and a balanced feel when the bat hits the ball. It is also considered as one of the best drop 3 BBCOR bats.

Like the CAT8 line, there is also the CAT 7 connect, a two-piece hybrid bat that has a carbon composite handle and a power-balanced alloy that also has a sufficient sweet spot.

Comparison Between Marucci CAT 8 Vs. CAT 7

Based on the Marucci CAT 8 review and Marucci CAT 7 review made by various players and users, the two baseball bat lines have as many similarities as differences, with the CAT 8 holding a slight edge because of its improved technology. Below is a detailed comparison of CAT8 vs. CAT7 bats.

Table Comparison Between Marucci CAT 8 Vs 7

When the CAT 7 was released, one of the best features that gave it a competitive advantage was the patented 2nd Generation Anti-Vibration Knob, or AV2 Knob, for short. It is a knob technology that features a finely tuned harmonic dampening system that allows players to perform better at-bat due to the shock-absorption quality and reduced negative vibrational feedback. The weight of the AV2 Knob is around two ounces and results in a drop weight of the same amount, resulting in lower swing weight.

The knob technology is also carried over to the CAT 8. However, in terms of vibrations, Marucci CAT 8 reviews show that it is better than the Marucci CAT 7. While they have the same dampening system, the improved alloy of CAT 8 is the reason for this improvement.

The SDX Connection, which can be seen in CAT 7, is a shock-dissipation technology that allows the bat’s user to experience a smooth, solid feeling during contact. Both the CAT 7 and CAT 7 Connect features the SDX Connection.

The two-piece hybrid CAT 8 Connect is constructed with an improved version of the SDX EXT Connection, or the extended shock dissipation connection technology. It increases stiffness further between the barrel and the handle. It maintains energy transfer to the ball while dismissing the unwanted vibrations from the hands of the batter. The SDX EXT Connection features a triple shock dissipating design, while the CAT 7 has just one level.

As mentioned, the CAT 7 series consists of the AZ4X alloy, which was the strongest material in any Marucci bat at the time.

However, continuous research led to the development of the AZ105 aluminum alloy, which can be seen in the CAT 8 bats. The new material is as durable as its predecessor but is stronger and lighter. Due to this, CAT 8 baseball bats are constructed with thinner walls in the off-centered areas, resulting in higher performance, better trampoline effect, and a more forgiving feel.

The use of an AZ105 aluminum alloy has allowed the manufacturer to construct a burlier CAT 8 with a larger barrel profile and multi-variable wall design. Because of this, CAT 8 has an extended sweet spot. The wall design will allow you to drive the ball harder if you use the CAT 8 instead of the CAT 7.

To illustrate the difference of the barrel diameter between the two, take these Marucci Senior League bats for instance. The CAT 7 -5 and -8 USSSA bats come with a barrel profile of 2 5/8″. On the other hand, the CAT 8 -5 and -8 USSSA bats have a larger barrel size of 2 3/4″. The improved alloy has allowed the manufacturer to create a CAT 8 youth bat and senior league bat with a larger barrel diameter without having to sacrifice performance or durability.

For the balance point category, there is a stalemate between the CAT7 vs. CAT8 bats. They are similarly constructed, both having a precision-balanced barrel and lower moment of inertia (MOI), which gives off a balanced feel for precision and control when at-bat.

As in all Marucci alloy, hybrid, and composite bats, every CAT 7 and CAT 8 barrel is engineered with a ring-free barrel design. There is no dead spot anywhere along the barrel of the bats, which means more barrel flex, better response rate, and a higher level of performance.

While the features of the CAT 7 vs. CAT 8 bats do not differ that much, particularly in their vibration dampener technology, you would be able to experience less vibration with CAT 8 because of the material with which it was constructed.

Marucci bats for sale typically cost around $200 to $500, which means that this equipment is for those who are serious about their games. That being said, when comparing the Marucci CAT 7 vs. CAT 8 lines, the latter is understandably more expensive because of the enhanced features and technology.

For instance, when you check the Marucci BBCOR bat version of the Marucci CAT 7 vs. CAT 8 series, you would see that the CAT 8 BBCOR or Marucci CAT 8 drop 3 bat is typical $80 costlier than the CAT 7 models.

Marucci CAT 7 is Better for Cost-Effectiveness

Because the CAT 7 comes at a cheaper price, it is the better option for those who want to save money when buying a BBCOR, USSSA, or youth bat.

The technological advancements infused in constructing CAT 8 have made it a better option for those who want to have better hitting performance. It has a larger barrel and an extended sweet spot, however, it has a lower swing weight, provides less vibration, and offers a more forgiving feel for the batter. It is a great choice for those who are playing in BBCOR, USSSA, or other youth leagues.

Marucci CAT8 BBCOR Baseball Bat: MCBC8 CHECK LATEST PRICE
If you click this link and make a purchase, we earn a commission at no additional cost to you.

Is Marucci CAT 7 a good bat?

The CAT 7 is quite outdated compared to the latest Marucci CAT lines. However, they could still pack a punch in games, especially in BBCOR and USSSA leagues. The sweet spot of the bat is still good enough compared its competitors and the technological advancements that have been introduced in the bat will let you maximize your performance.

What is the best Marucci CAT bat?

Although the differences between the CAT 7 vs. CAT 8 bat are the ones discussed here, there is actually a new Marucci bat in the CAT line: the 2021 CAT 9 and CAT 9 Connect. The CAT 9 is made of the AZR alloy, which provides a more responsive and more forgiving feel for better performance on the field. The BBCOR bat of the new series comes equipped with a new Longitudinal Groove System. Furthermore, CAT 9 also has a stiffer connection because of the Outer-Locking System, which attaches the carbon composite handle to the barrel from the outside in.

Marucci’s commitment to innovation and quality has led to the development and evolution of the CAT baseball bat line. You cannot go wrong with either of the two of the latest in the CAT series, the CAT 7 and CAT 8. BBCOR, USSSA, and youth leagues have stringent requirements when it comes to allowed bats. Both the CAT 7 and CAT 8 lines have bat selections that not only comply with these specifications but also maximize your performance.